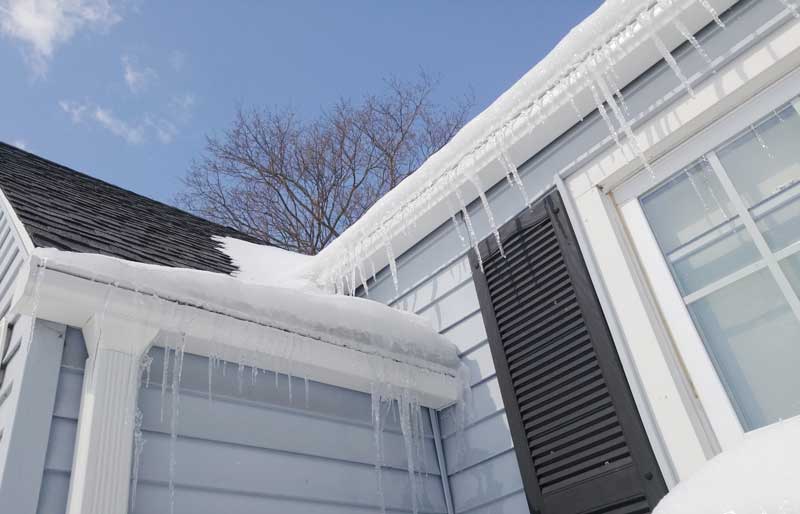 Above-average snowfall and below-average cold temperatures throughout the winter season may leave homeowners finding that the wrath of this winter has left long-term roof damage in its wake.

Read on to learn more about ice dams and what you can do to help avoid the increased potential for ice dam damage on your home.

What is an Ice Dam?

An ice dam is a wall of ice along the edge of the roof that forms when melting snow continually thaws over warmer portions of the roof and refreezes along the roof’s colder eaves.

The melted water that pools behind the ice dam gets trapped, creating the potential to leak into the home and cause damage to:

As you probably already know, wintertime presents many challenges for residential and commercial roofing systems.  Extreme temperature shifts, high winds, snow, and ice accumulation, along with excess water runoff can all lead to issues if your roof isn’t prepared.  With that said, for most of us it can be hard to know exactly what information is true, and what is false when dealing with ice dams and snow and we wanted to take this opportunity to answer any questions you may have.

Here is a list of questions or misconceptions that we’ve encountered over the years that may help you during your roofing research process.

False: My shingles or other components were defective or  installed incorrectly and causing ice dams to form.

True: Ice dams are not caused by faulty installation or bad roofing components. Ice dams are caused when cold air around the soffit meets warm air inside the shingles right above the soffit.

False: If I replace my asphalt shingle roof with one that includes ice and water barrier protection, my roof will no longer form ice dams or allow water to seep in.

True: A new asphalt shingle roof with ice and water barrier  protection will not hold out water caused by ice dams. A new roof will most likely reduce water intrusion, but no matter how new the roof is, it is designed to shed water – not hold water.

False: Ice dams cannot crack roof shingles or cause them to become unsealed.

True: After the formation of a just one single ice dam, shingle seals may not reseal causing future failures sooner with similar amounts of ice and water.

False: Ice dams are not known to cause damage to anything other than the immediate surface of the roofing area.

True: Once roof shingles and gutters are warmed by the sun, ice can detach and fall off with significant force and velocity. This creates the potential for Liability and damage to persons or property below.

False: It’s expensive to hire a contractor to remove ice dams and snow.

False: If you see water or ice dripping out of your siding or soffits, it’s nothing to worry about.

True: Water and ice dripping out of soffits, windows and siding is actually coming from the underside or inside of your roof sheeting or vapor barrier. This is a precursor to a certain leak and is only a matter of time before it reaches the inside of your home.

False: Removing 3 to 6 feet of snow from the roof edge is guaranteed to stop an ice dam from forming or reforming.

True: Ice dams will continue to form and reform until snow is completely removed. With a substantial snowfall and frigid temperatures, removing only partial snow will allow the ice dam to reform.

False: Roof vents covered with snow and ice aren’t a problem and the heat from the vent will melt it.

True: Roof vents covered with snow and ice will trap heat in the attic. Not allowing heat to escape from vents warms the attic air temperature creating a winter greenhouse effect and can cause ice dams.

True: Pressure washers can create unnecessary icy conditions and can add excessive weight which can cause even more damage. Also the pressure from these machines can cause blown off granular loss, as well.

False: Once your attic insulation is wet, it will dry and no harm is done.

True: Once insulation gets wet, it will not perform as it was intended. Although wet insulation can dry out, it will also collapse and condense losing its entire R-value.